The Super Bowl is an enormous cultural event that is way larger and way more significant than just a simple football game. For advertisers, it is an opportunity to reach millions of potential customers within the context of an enormous and influential media event. Each year, countless individuals choose to watch the game “just for the ads,” and corporations recognized the Super Bowl as an opportunity to reach these viewers with creative and innovative advertising strategies. This year, one particular company has been widely regarded as having “won” the Super Bowl advertising game: Tide, with a unique an innovative #itsATideAd campaign.

The ad itself is brilliant in its simplicity, and absolutely devilish in its execution and influences. It begins with David Harbour (of Stranger Things fame) behind the wheel of a car, in the convention of any other typical car ad. Next, Harbour at a bar in an approximation of a generic beer ad. This goes on with Harbour mimicking the tropes of various ad formats, until finally revealing that the commercial is in fact an ad for Tide laundry detergent. (Look at those clean clothes! What else could it be an ad for?)

Finally, the audience is left with a leading question–does this make every Super Bowl advertisement a Tide Ad? By attaching the simple idea of clean clothes, something that every Super Bowl ad will inevitably have, with the Tide product, the company effectively hijacked every other company’s ad by forcing the viewer to question whether it might in fact be a Tide ad. Even when an ad was for another product, there was a lingering thought in the back of our minds, “wait, is this another Tide ad?” Advertising analysts were quick to tout the success of Tide’s campaign and declare it the “winner” of the Super Bowl ads. To a large extent, I agree with this general sentiment–the #itsATideAd campaign was a success, largely because it was able to utilize the mechanism of memes – a process I’ve written about extensively in my senior thesis. By attaching their brand to a set of images/videos and commonly understood conventions, the Tide ads spread virally within the mind of each viewer, and throughout online and offline communities as well. While this has led to commercial success for Tide, and will likely drive engagement with their brand and increase product sales, they have done so at a significant risk. It is only possible to “hi-jack” the meme mechanism for monetary gain in a limited manner, and for a limited time. Tide now runs the risk of their #itsATideAd expanding beyond their original scope, and evolving into a message that can no longer be controlled.

When I refer to the mechanism of memes, I’m talking about the unique manner in which the meaning of a given Internet meme develops, and changes over time. This is an issue that is central to my senior thesis, in which I’ve examined the evolution of the Pepe the Frog meme from an innocent cartoon to a symbol of white nationalism. I argue that there is an important distinction between a meme instance (a single image, video, or textual occurrence of something) and the meme as a whole. The way that an overall meme is understood and interpreted is influenced by the sum of all the individual meme instances which have been created. In turn, the meaning of each individual instance is also influenced by the meaning of the overall meme and the way that it is understood.

However, what’s significant about this process is the fact that anybody is able to take part in it. You no longer have to be a large broadcasting corporation to disseminate a message that reached large audiences. The fact that virtually everyone has Internet access and the ability to manipulate images, there is an incredibly low barrier of entry for anyone to create meme instances of their own. Any newly created meme instances can slowly chip away at and gradually redefine the meaning of the overall meme, and therefore the meaning of every other meme instance as well. In effect, the mechanism of memes makes it possible to change the meaning of another image without ever actually touching that image. With memes, the traditional notions of ownership and control no longer apply. Just because you are able to control a single meme instance, somebody else can still influence the way that image is interpreted just by creating additional meme instances.

In the case of Pepe the Frog, this occurred as white nationalist groups began creating Pepe instances that included Nazi imagery–such as Hitler moustaches, SS uniforms, and swastikas. These instances gradually redefined the meaning of the meme as a whole, and now every other instance of Pepe the Frog was at least loosely connected with those same images.

For Tide, their ad campaign uses the mechanism of memes by following an established format and priming the viewer to expect certain outcomes. First, the viewer is presented with something that seems like a familiar ad, or an image that they are used to seeing. However, in a twist of these expectations, Harbour appears and points out that something within that original image is incredibly clean. Finally, Harbour suggests that the fact that something within that image is so clean makes the image not what it originally seemed; it is in fact actually a Tide ad.

Throughout the Super Bowl, Tide ran several ads spaced throughout the duration of the game. These ads repeated this process, and solidified the process as outlined above. For instance they spoofed an Old Spice ad:

(Of course, these brands were easy to get on board – Procter and Gamble owns Old Spice, Mr. Clean, and Tide)

There was even involvement by the NFL itself got involved with the #tideAd phenomenon. During a bump from advertisements back to the game, the TV graphics showed Harbour edited into (immaculately clean) Patriots and Eagles uniforms, alongside a Tide logo. The voiceover commentary? “Welcome back to the world’s biggest Tide Ad.” 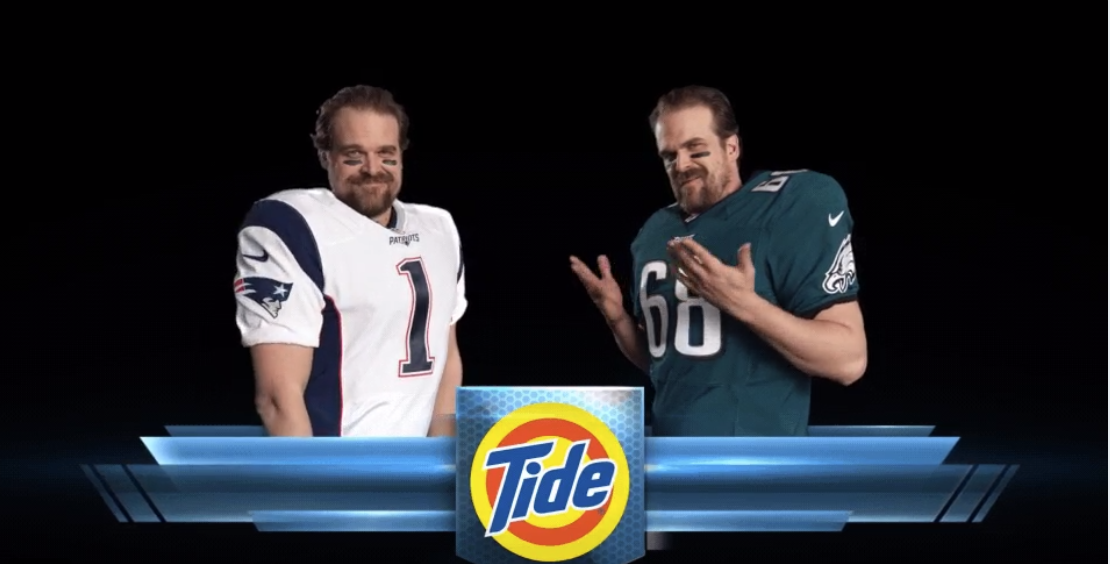 Through this repetition of the format, audience members were primed to question all the content that they were presented from that point forward. Effectively, Tide forced us to think about their brand and their product every time an advertisement ran. Personally, I was immediately suspicious of the Australia Tourism ad (the fake Crocodile Dundee movie) as well as an advertisement for another laundry detergent, Persil! That’s some pretty powerful marketing. By using the mechanism of memes, and essentially kickstarting the “#itsATideAd” meme, Tide’s advertisement campaign during the Super Bowl was incredibly effective.

However, the decision to use this method for marketing—that is attempting to use Internet memes for commercial purposes—is incredibly risky. The problem is that even though Tide was the original creator of the #itsATideAd campaign, they no longer have control over how it is used. By suggesting that everything is a Tide ad, they’ve also surrendered the ability to approve what is or is not actually a Tide ad. They have no meaningful basis to declare certain instances of #itsATideAd as official usage while differentiating which images are unofficial. On the one hand, this is the entire point of the advertisement! For viewers to question everything they see as a potential Tide ad. Just a few days after the Super Bowl, instances of #itsATideAd memes began appearing online: These instances follow the same general structure of the ads that Tide ran during the actual Super Bowl. “Look how clean at this _____ is. It must be a Tide ad.” In each, an image of Harbour from the original ads has been edited over some other background image. In reality, meme instances such as these likely serve to bolster Tide’s brand image, and would not draw negative response from the company. However, the problem is that it is entirely possible for other users to create meme instances that take the messaging to much more extreme lengths: The fact that is is nearly impossible to discern intention—whether or not these references are meant sincerely, or as jokes—notwithstanding, no company wants to be associated with 9/11 or the Nazis. These are topics that are universally avoided by advertisers because of how volatile they are. And yet the format of these last two meme instances is exactly the same as that of the Minecraft Server and the Millenium Falcon. In fact, the 9/11 and Nazi instances still adhere to the same general format of the original TV ads themselves! But because Tide’s campaign relies upon the mechanism of memes for its effectiveness, the company has no effective manner in which to distinguish between official and unofficial use of the format. Effectively, it is entirely out of Tide’s control and the 9/11 and Nazi instances are pushing the meme in a direction well away from its original meaning. Using memes for commercial purposes is incredibly risky for this exact reason: it is incredibly easy (perhaps even inevitable) that somebody online will take the original intention of the image and drag it to new extreme lengths.

Ultimately, Tide’s advertisement, and its spread into online communities is probably really good for their profits. At least for now. But one of the major issues that I raise in my thesis is that memes fervently resist commodification by dominant groups. In other words, it’s incredibly difficult to use a meme for commercial ends. Even if a company uses a meme for monetary gain, they can only do so temporarily and in a limited fashion. And they do so at the risk of it being co-opted and redefined by small fringe groups. This is especially risky because Tide no longer has ownership or control over how the #itsATideAd campaign is used. Now that they’ve started the proverbial meme machine, they no longer control it and more importantly–they can no longer shut it off. Tide has declared that everything can be a Tide ad, but in doing so has also conceded the power to define what is not a Tide ad. It is entirely possible that the campaign will remain successful for several weeks before fading away into obscurity. But it is also entirely possible that it will take on a life of its own and haunt Tide’s reputation, much like Pepe the Frog and its white nationalist connotations. Especially in the recent wake of the “Eating Tide Pods” meme, the decision to run with the #itsATideAd campaign in this year’s Super Bowl is an incredibly risky move by Tide. Time will tell whether or not it pays its dividends.